As the Carbon Literacy partners in Wales, we are hard pressed to remember a more extraordinary few weeks of climate news. Below is a brief round-up:

Today in the Guardian official advisers to Government say ‘Do it now’: UK must set zero-carbon target for 2050, say official advisors

Extinction Rebellion civil disobedience in London and other cities

BlackRock, have told their investors that they must “up their game” to recognise the extreme risks they face from climate change.

Legal & General this week stated that climate is the top of the list of concerns that they have regarding the way that companies are run.

Increasing numbers of pension fund trustees are seeking assurances that their employees’ retirement contributions are not finding their way into embarrassing or inappropriate investments.

Whether you identify most with the ‘eco rebels’ or the kings and queens of industry: the call to urgent action on climate action cannot be ignored any longer.

What can YOU do?

As one of the thousands already Carbon Literate, or as someone interested in Carbon Literacy, in the future, you are ideally placed to turn your knowledge into action.

If you come across a conversation about climate change you could contribute by pointing out ‘doing something about it is easy’?  If you don’t happen across such a conversation, could you start one?  We have turned to the national climate change research centre of excellence; The Tyndall Centre, for six handy actions for you; in summary and with some notes.

None of the actions are difficult, they are all significant, and most will leave you happier and with a better quality of life too! 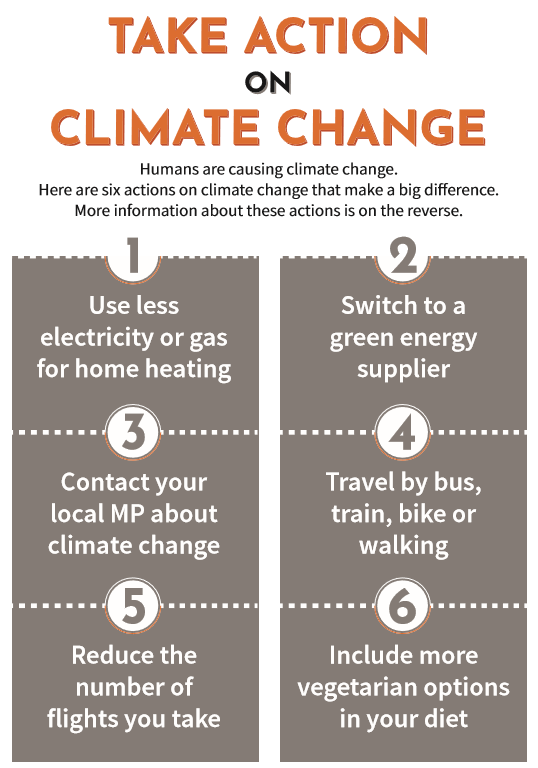 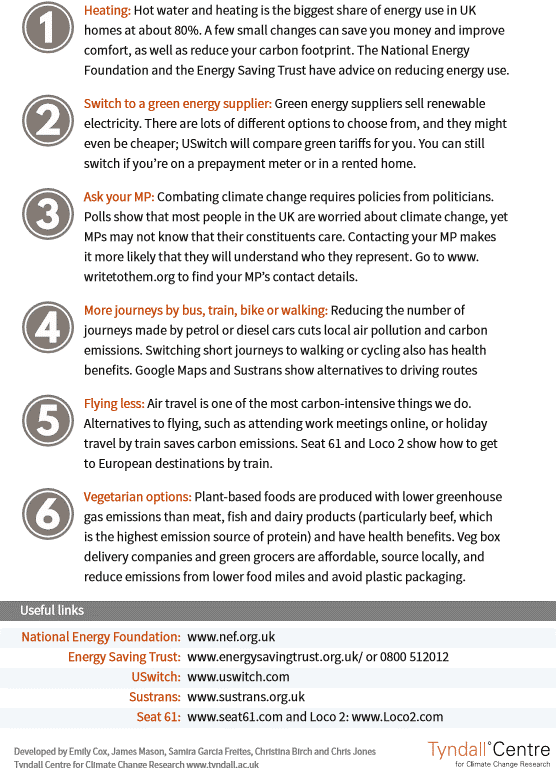 “If only one of us does something, it makes a difference. But if a whole army of us do something, it’s a great expression of the power of our Carbon Literacy in making a safer future for our children.”

If you do have a climate change conversation we’d love to hear about it via the We Are Carbon Literate Facebook Group.

NOTE: The Tyndall Centre mention USwitch as a good route to a green energy tariff.  Another great route is via Big Clean Switch who are also certified as a Bcorp.