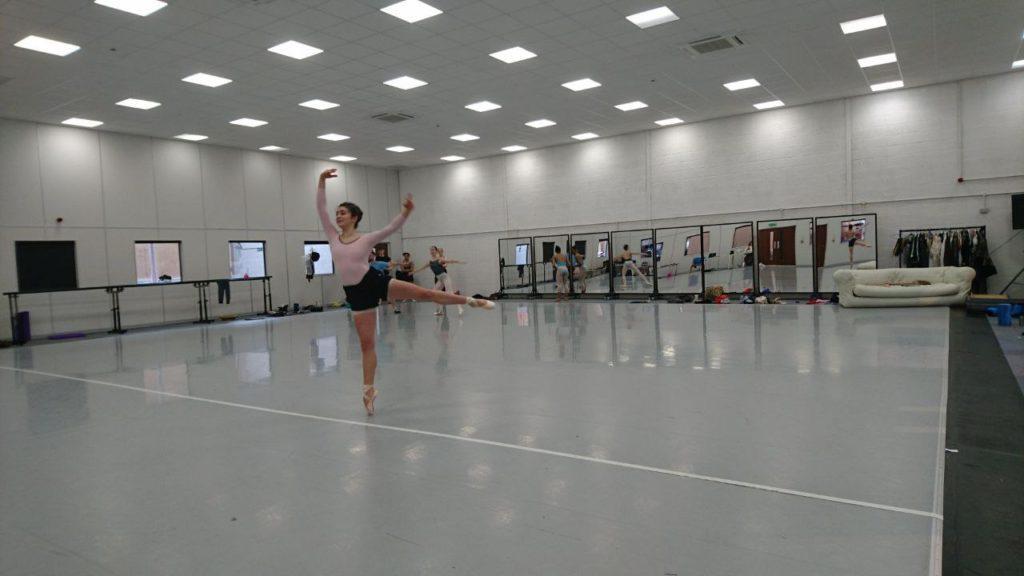 In April we were delighted to hold our networking lunch with Cynnal Cymru member Ballet Cymru. Located in an industrial warehouse in Rogerstone, Newport, they have created a purpose built class dance studio within a sustainable space, attracting talented young artists from across the world.

Ballet Cymru describe themselves as a ballet company who ‘like to do things a bit differently’ by making what they do exciting, innovative and relevant. Their story is one of resilience and adaptation, including surviving from 1990 to 2003 without any financial support in the form of funding, to flourish into the beacon for classical ballet in Wales that they are today.

Following purchase of the large industrial unit in 2013 Ballet Cymru now houses dance studios, office spaces and public areas, but being an old building it was expensive to heat and there was water coming in through the old roof. As members of the former Sustainable Development Charter they were keen to seek renewable energy solutions, they carried out a refurbishment programme which included overcladding the main roof, insulating the interior walls (with recycled glass fibre) and installing photovoltaic panels on the roof to generate income from solar energy. This was achieved thanks to funding from The Arts Council of Wales Capital Grants programme, The Carbon Trust Green Business Fund, Garfield Weston Foundation, the Linbury Trust and other smaller funds, and individual donations were received at fundraising events held at the premises.

Ballet Cymru also chose to switch to green electricity as supplied by Ecotricity to set up a green tariff for electricity and gas supply to the premises. They also chose to feed into Ecotricity in order to benefit from the energy generated by the solar panels and export it back to the grid. Using this scheme intuitively; they expect to pay back installation costs within eight years.

We were given a tour of the premises and were lucky enough to see a rehearsal of the finale to their upcoming performance of Cinderella, we were told that the original Brothers Grimm version had been the inspiration for the production as the eerie and dramatic score played in the background. We were introduced to the dancers who have travelled from all over the world to be a part of the Ballet Cymru family. They joined in the networking and we learned that they had attended workshops on learning Welsh and were particularly excited about the vegan dishes that we had brought with us as a part of our low-carbon lunch.  There was a real family feel to the venue and the company as a whole. We are really pleased to have been a part of their sustainability journey.

The project has enabled Ballet Cymru to create a sustainable venue and creative space for company activities, events and studio hires. It also enables them to sustain their community ballet classes and workshops for school children and local community groups.