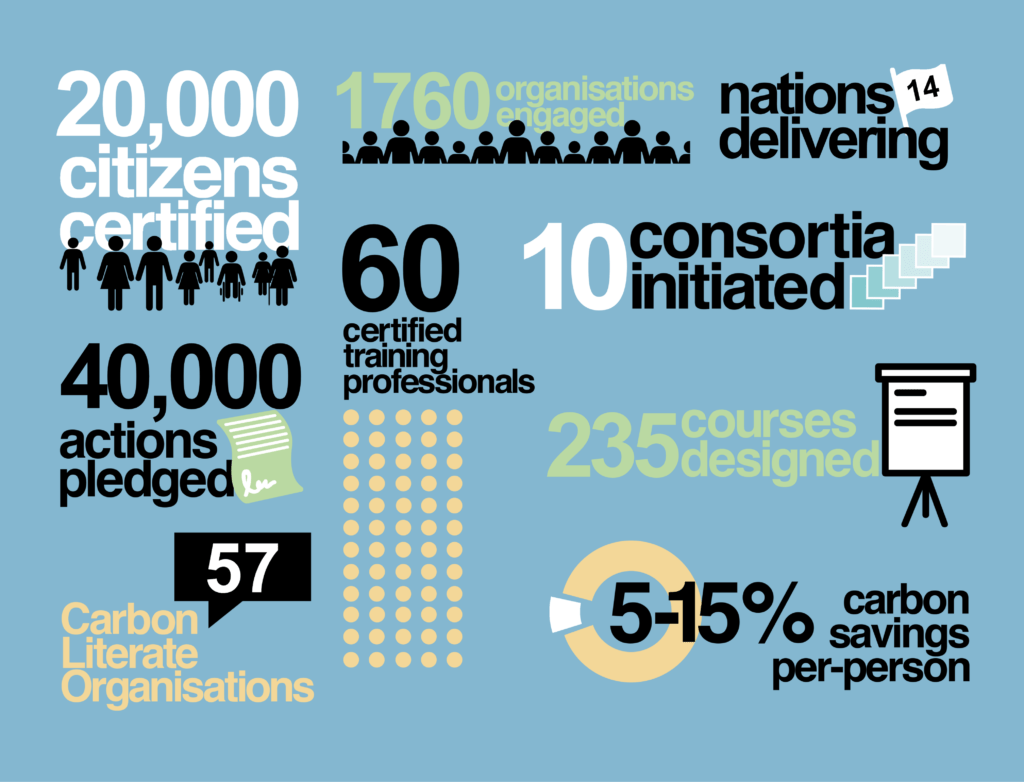 As extreme weather events driven by climate change become increasingly severe, and their economic impacts increasingly obvious, the UK approaches its leadership and hosting of the COP26 United Nations climate change negotiations in Glasgow beginning on November 1st. 2021 - we bring you some good news from the Carbon Literacy Project!

Our Government, employers, educators and civil society are all grappling as to how to engage people and organisations in delivering meaningful carbon reduction and action on climate change quickly and at scale.

In very positive news therefore, The Carbon Literacy Project has today announced that more than 20,000 UK citizens have now been formally assessed and certified as Carbon Literate, and as a consequence, pledged and taken well over 40,000 actions to directly address climate change and immediately reduce UK carbon emissions.

Working with citizens, groups and organisations drawn from all sectors of society, The Carbon Literacy Project oversees the delivery of a days worth of learning and action about climate-change. Uniquely however, although quality controlled by the Project, the training is co-designed and delivered not centrally, but by members of the sectors, groups and audiences receiving the training.

Carbon Literacy is thus adaptable for anywhere and yet consistent everywhere, and engages, informs and inspires audiences both to act right now to reduce their carbon emissions, but also to begin to plan and take much longer term action toward a zero-carbon society, whatever they do, and whoever they are.

The Carbon Literacy Project (wholly owned by The Carbon Literacy Trust, Registered Charity no 1156722) works with citizens and community groups, social housing providers and civil society. It works with employers both public and private sector and organisations from SMEs to PLCs and local authorities and Government, and works in formal and informal education with schools, colleges and universities across the UK.

Because of this unique reach across all organisations and sectors of society, the Project has been able to bring together groups, organisations and individuals, to form unique partnerships and consortia, working and acting together to share ideas, resources, and funding, to achieve far more to accelerate climate action and reduce carbon emissions immediately than any single organisation could ever achieve alone. In summary, in regards to Carbon Literacy: “The whole is far greater than the sum of the parts”.

Because of its unique approach, the training and certification of 20,000 individuals has been performed not by the central Project working alone, but by the vast network of sectoral partners and organisations distributed across the sectors and geography of the United Kingdom and beyond.

Cynnal Cymru played a pivotal role in bringing Carbon Literacy to Wales and have certified over 550 people:

“In 2017, I was the only Carbon Literacy trainer in Wales outside the BBC. Since then, we have collaborated with Manchester Metropolitan University to equip another 60 people within the social housing sector with the skills to deliver their own Carbon Literacy course. This September we launch Cynnal Cymru’s ‘Train the Trainer’ course. Over the last four years I have provided Carbon Literacy to around 500 people from all kinds of background and across a wide spectrum of roles and sectors. Most of these did the course in 2020/21! I am proud to have brought Carbon Literacy to Wales – I now want it to continue its phenomenal growth so that every citizen understands what global warming & climate change are, the relevance to their well-being but most importantly of all, the actions and behaviours they can take in response to this global challenge. We all have a role to play in this – climate change will spare no-one.”

“I was honoured to join the cohort of Carbon Literacy Trainers delivering this insightful and motivational training across the UK in 2020. Since then, I have trained individuals from a wide variety of organisations and spanning the globe with attendees from Canada, The US, Australia and Germany – and learned a lot in the process. I’m so pleased to see the 20,000 citizens certified milestone reached as I genuinely believe in the power of this training and see it as climate action; in the carbon reductions made as a result of the pledges but also the course’s reach in that it not only spurs those in attendance into action but allows them to bring their families, friends and workplaces on board too. Everybody has a part to play in tackling the Climate Crisis and Carbon Literacy helps people to realise their role in this and arms them to empower others.”

Since its inception in 2012 the Project has grown steadily but for the last five years has been doubling in size every 20 months.

This has been followed by adoption within the wider private and commercial sector, with collaborative toolkits for social housing, the rail sector, the automotive sector, and museum and galleries all now either launched or in advanced preparation.

Work by Jacobs Engineering indicates that each Carbon Literate citizen reduces their personal and/or professional resource footprint by between 5% and 15% annually.

“One of the core values of Carbon Literacy is that by working together we achieve far more than any of us could alone.”

“When Carbon Literacy learners are given both knowledge and agency to take action, we see newly Carbon Literate individuals taking personal action at the small scale, but also professionally at massive scale, resulting in real savings of carbon immediately, and a long-term shift towards the kinds of personal and organisational behaviours that will deliver the zero-carbon society that we all need.”

“We could not have achieved this without the work of Cynnal Cymru-Sustain Wales – who have worked so hard to make this happen and deliver real change now”.